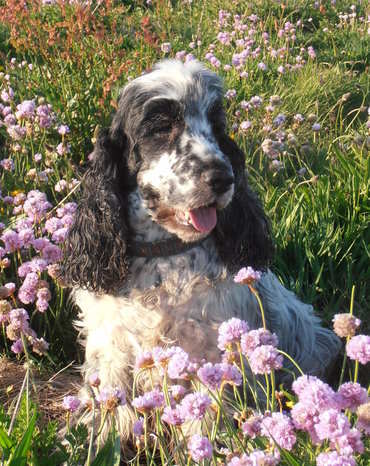 Marvin is a lovely light blue roan boy - with good substance, nice and short, good angulations and a lovely coat.  He had a very good show career winning many Best of Breeds and Group placings in Guernsey and Jersey and placing at UK shows too.  The highlight of his career was being awarded a VHC in a class of 21 at Crufts 2009 under Judge Mrs A Koskelo (Finland).

Unfortunately in August 2011 Marvin under went a big operation due to a tumour in his bladder and as a result of this he had to be castrated as his prostate glands were enlarged :-( :-(  He has been back in the Show ring and was awarded BoB and Group 2 in October 2011.

He has been out and about in 2012 and had a few Best Opposite Sex's results but he has now retired from the show ring and enjoys life to the full at home being a very loved and spoilt Boy :-)

He is a joy to live with although very cheeky and hates being told off ... he loves everybody and everybody seems to love this cheeky chap too.