Well what a year 2008 has been for me and my little Show Team. Both Marvin & Oliver have qualified for Crufts 2009 and Channel Island Dog and Puppy of the Year. Oliver has exceeded all my expectations by being being placed at all the Championship Shows we attended in the UK, going Reserve Best Puppy in Show, winning 2 Gundog Puppy Groups and 1 Junior Group. Marvin has also had a very good year although not doing so well in the UK he has done well at the Guernsey & Jersey Show's attended. Winning 3 x BOB's and 1 x Group 1. We are looking forward to catching up with our friends at Dog of the Year in Jersey and also at Crufts. Photo below Marvin and his trophies ....... 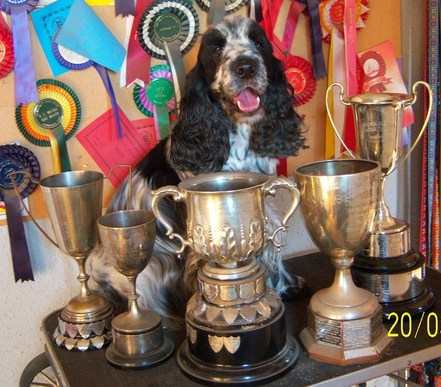 14 December 2008 - The Guernsey Kennel Club Christmas Match - Judge Heather Watkins "Nineglens" Oliver "Lyntonridge Loyalty Card at Derrindee" Best Junior in Match and Reserve Best in Match. I had another great day today with Oliver. Many thanks to the Judge for thinking so highly of Oliver .... 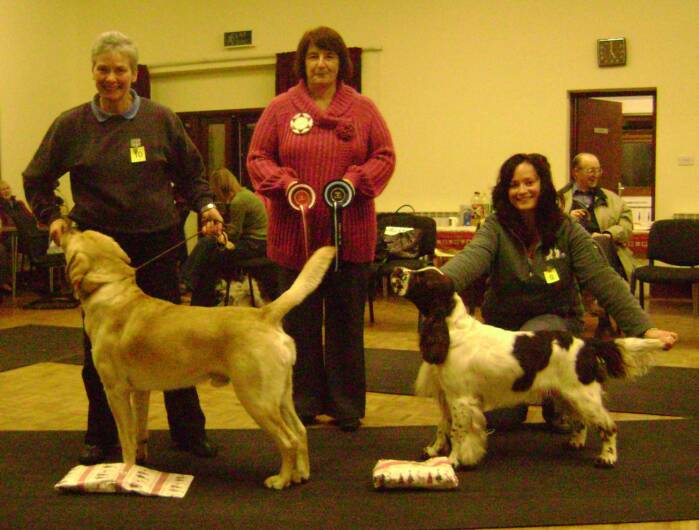 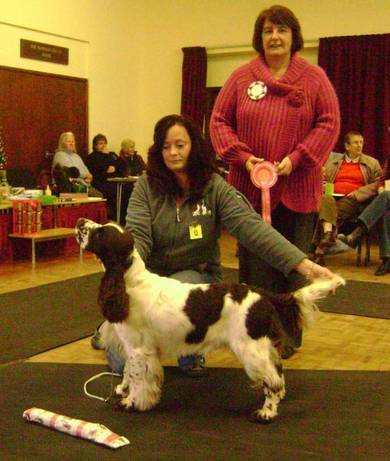 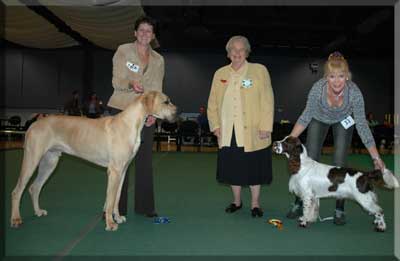 19 October 2008 - The Guernsey Kennel Club Match - Judge Barbara Lawrence Oliver "Lyntonridge Loyalty Card at Derrindee" Best Puppy in Match and Reserve Best in Match.  This was Oliver's last puppy event and he has gone out in style.  Many thanks to the Judge for thinking so highly of Oliver .... Photos below shows Best in Match winner Oakmorton Ptarmigan with owner Christianne Creber, judge Barbara Lawrence and Oliver and I and then Best Puppy in Match Oliver and I and Pam Smith with Magic Miss Moneypenny by Islanza. 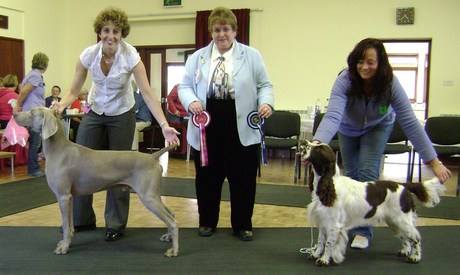 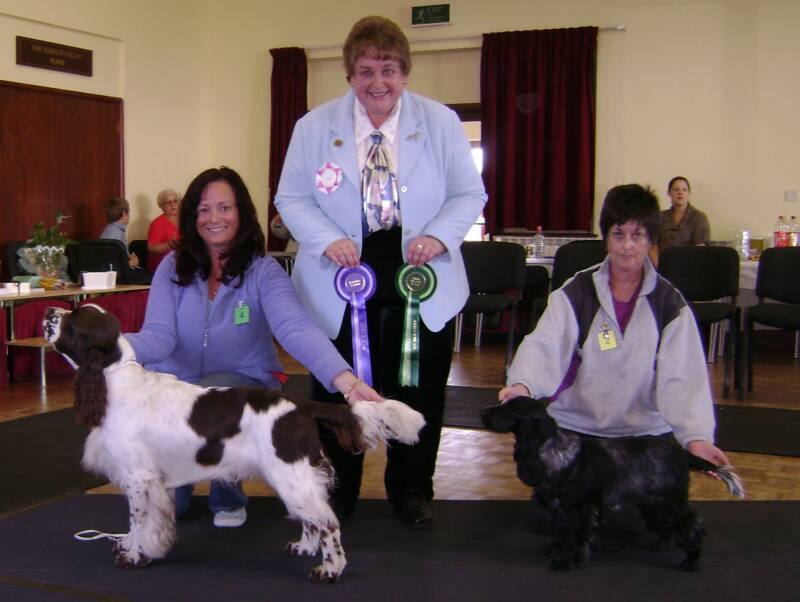 07 September 2008 - The Guernsey Kennel Club - Autumn Open Show - Judge Mr Alan Curry "Lodore" - Oliver "Lyntonridge Loyalty Card at Derrindee" - 1st ESS Puppy Dog, Best ESS Puppy, Puppy Group 1 and 4th Best Puppy in Show and Best Sporting Puppy. This was Oliver's last puppy show as he misses the next Guernsey one by 2 days :-( He showed most of the time well, although he has started messing around again and jumping up for his lead, so it will be back to ringcraft for us after my holiday. Mr Curry the Gundog Judge was very complimentary and gave me lots of advice. So we will be taking that onboard. Thank you for thinking so highly of Oliver and sorry that we let you down in the Best Puppy in Show challenge. Picture below shows Mr Curry with Oliver and I .. 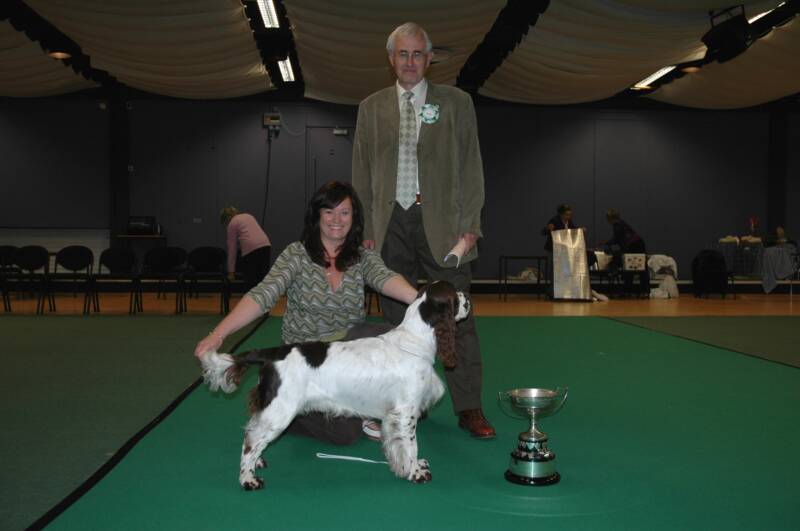 31 August 2008 - City of Birmingham Championship Show - Judge Mr Ernie Darby "Classicway" (Springer Spaniels) - Oliver "Lyntonridge Loyalty Card at Derrindee" - 2nd Puppy Dog (CRUFTS QUALIFICATION 2009). Lynn who bred Oliver showed him for me today, as I was in the ring with Marvin. He really showed well and deserved his 2nd place in a good class of 6 puppy dogs. Lynn received lots of lovely compliments about Oliver which was nice to hear and when I took him in the Puppy Dog Stakes - Miss Jean Lanning was sitting by the ringside and remembered us from the Guernsey Show. 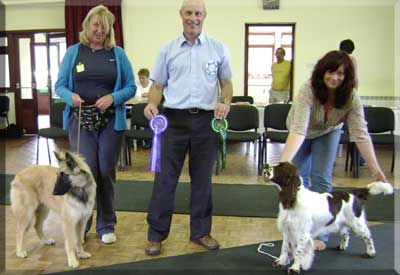 14 August 2008 - Critiques received from Miss Jean Lanning - Lyntonridge Loyalty Card at Derrindee - Well balanced, clean outline. Stands on excellent legs and feet. Quality all through. Promises to finish well. Shenmore Spruce at Derrindee - Had head and eye pleasing of the breed. Little overdone in leg furnishings for an English Cocker

Judge Mr L Hunt (Cocker Spaniels) - Unfortunately Marvin's classes clashed with Oliver so I was unable to show him. I did however ask a friend to show him Kim Gain of Molkara Cocker Spaniels but he wasn't that happy being handled by somebody else. Hopefully there classes will not clash at the next Champ Show.

15 June 2008 - The Guernsey Kennel Club Match - Judge Mrs Carol Tuner "Chakona" Oliver "Lyntonridge Loyalty Card at Derrindee" Reserve Best Puppy in Match and not to be outdone by his young kennel mate Marvin "Shenmore Spruce at Derrindee" was Reserve Best in Match. What a lovely day for Me & My Boys ..... Photo's below. 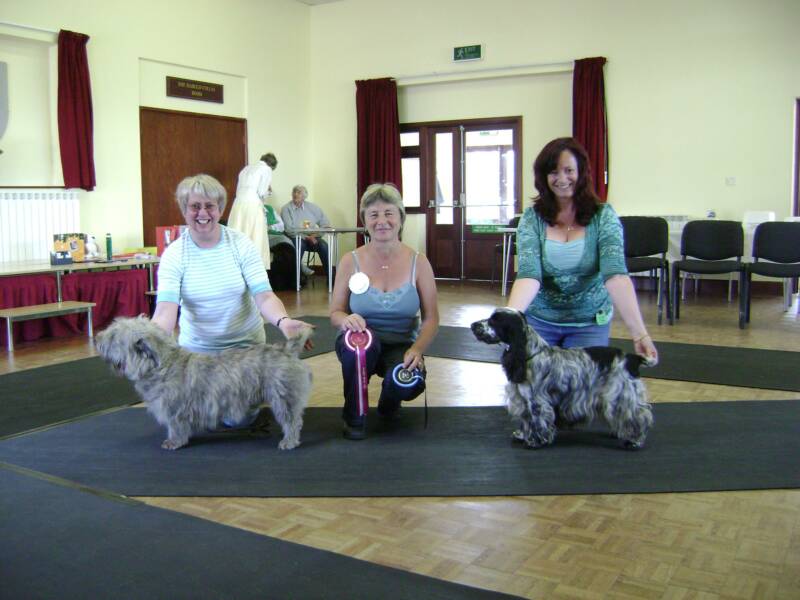 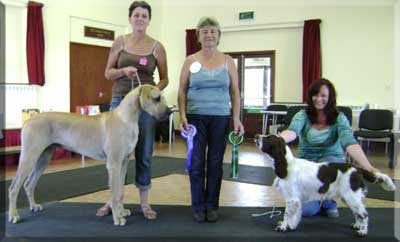 Judge Mrs A Moore (Cocker Spaniels) - Marvin was unplaced in his classes he showed really well and I was thrilled to receive the photo's below from Michelle Hatton of Royaldean Cocker Spaniels. It was a lovely surprise .. Thank You Michelle. 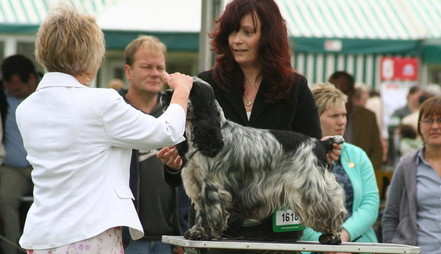 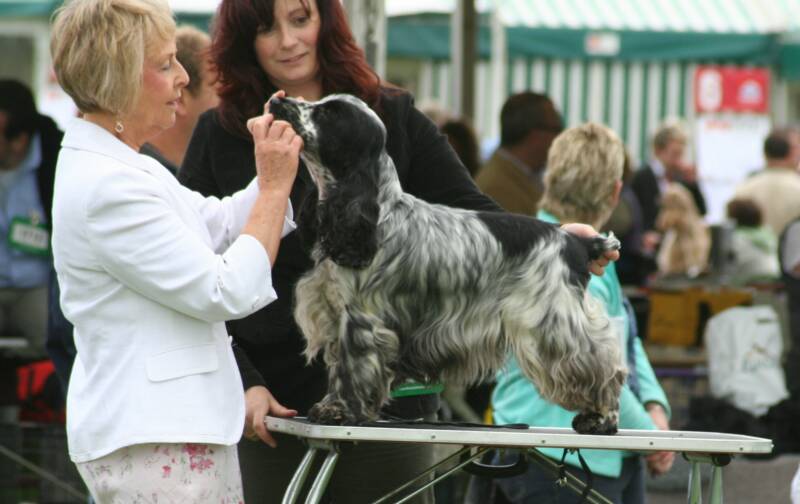 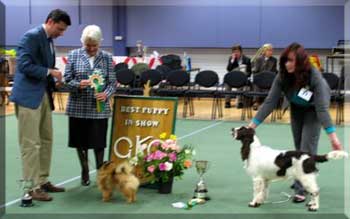 03 May 2008 - The Kennel Club of Jersey Spring Champsionship Show - Judge Mrs Brenda Banbury. Marvin "Shenmore Spruce at Derrindee" 1st Open Dog (2), Best of Breed and AV Gundog Open Dog 3rd. This was to be Oliver's first Show but unfortunately the night before when we were loading the car and my friend took him on a lead down the path he was attacked by my nextdoor neighbours adult Alaskan Malamute. Luckily Oliver managed to escape threw sheer fear but I thought it was important for him to come with me and not be left at home. He was fine with no visible injuries and it wasn't until the vet looked at him at the Show that he said he was badly bruised and we did find puncture wounds :-((( At the Show I asked if Mrs Banbury would mind going over Oliver which she was delighted to and awarded him a 1st and Best of Breed. We did not challenge in the Puppy Group though as Oliver was lame and in pain, but from what she saw of Oliver she thought he was a smashing puppy and hoped that this incident will not spoil his show prospects. 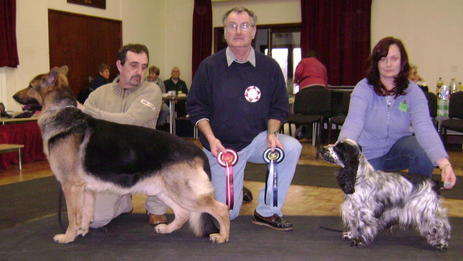