Well that's another year's showing done and dusted. Although Oliver and Marvin haven't qualified for Crufts 2012 they have both done very well under the various Gundog Judges that have come over to the Channel Islands winning numerous BOB and Group placings between them. I've even took the plunge and taken the car away to the UK three times so nothing stopping me now from doing more shows in the UK next year. Hopefully next year I will be able to finally add a Cocker Puppy to my little gang after waiting two years now.

30 October 2011 - The Guernsey Kennel Club Winter Open Show - Judge Mrs Muriel Bailey - "Oliver" Lyntonridge Loyalty Card at Derrindee - 1st English Springer Spaniel Open Dog, 2nd AV Open Gundog Dog. "Marvin" Shenmore Spruce at Derrindee - 1st Cocker Spaniel Open Dog, Best of Breed and Gundog Group 2!! I couldn't believe it when Mrs Bailey gave Marvin BOB and was absolutely overjoyed when she awarded him Group 2, even more so as it has only been two months since his operation. Not to be out done "Douglas" Kyna Charlie Brown at Derrindee was 2nd in a very big AV Veteran Gundog and was only beaten by the eventual Best Veteran in Show!!! Another emotional day and lots of lovely support from my wonderful friends!!! Thank You all and sorry if I made a few of you cry with my tears.

23 October 2011 - The Guernsey Kennel Club Match - Judge Mrs Yvonne Windson - I just took Douglas today and I am pleased to report that he went Best Veteran in Match!!! A lovely afternoon with great company. 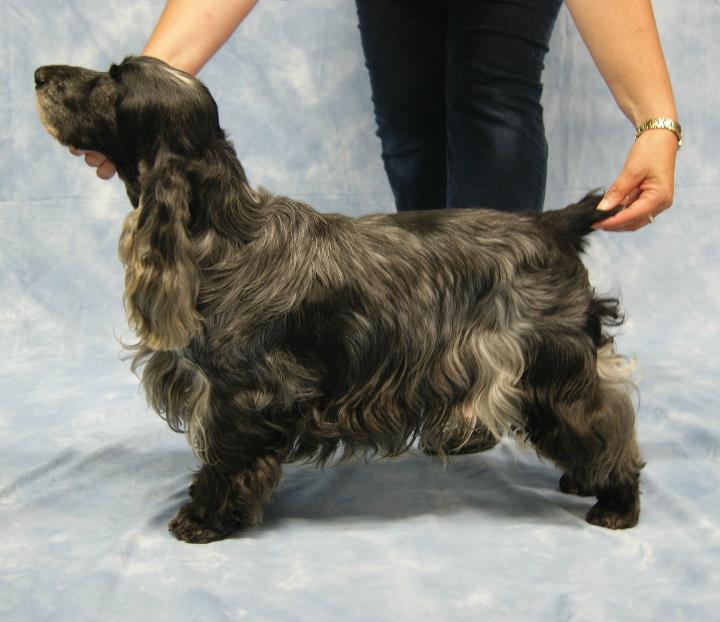 28 August 2011 - Well what a worrying week .... Marvin had a Vet's appointment on Wednesday as he was peeing blood!!  I dropped him off at 9:20 as we had decided that it was time now to have him scanned.  I had a phone call from my Vet to say that something had shown up on his scan :-( and the Vet wanted to talk to me about it :-( As you can imagine this was very upsetting as Marvin only turned 6 in June.  After this horrible news I took the afternoon off work and then made an appointment to go and see the Vet.  Upon seeing the Vet he showed me Marvin's scans and to my horror there it was a tumour in his bladder and some in the bladder wall :-( Thankfully there wasn't any anywhere else but his prostate glands were enlarged.  The Vet then went through the options and what he proposed to do was remove the tumour in his bladder, together with half his bladder ensuring that a good margin was taken around the tumour.  He also had his prostate glands removed and unfortunately it was recommended that he should be castrated to prevent any problems later on!!  When the Vet mentioned removing half of his bladder this really worried me but the Vet said it was nothing to worry about as part of the bladder would grow back!!  Marvin was then booked in for Thursday morning for the surgery.  It was very upsetting taking him to the Vet as I think he must have known something was up and was very unsettled which is unlike him when he is in the car.  I signed my consent for the operation and left with tears in my eyes and went to work.  To my delight when I checked my phone I had a missed call from the Surgery so immediately phoned them a little apprehensive but was immediately reassured that Marvin's surgery went very well and that I could collect him anytime after 4pm.  When I collected him he was very sleepy due to the anesthetic so I settled him in his bed and he didn't move for about 5 hours.  He had a restless night so I tried to keep him comfortable.  Leaving for work in the morning was hard as he was very restless again so I phoned my Dad to see if he could check on him for me a couple of times during the day and thankfully he seemed to settle.  I'm pleased to report that he has had been out for a couple of walks and is continuing to make great progress which is a huge relief as when I was told he had a tumour you immediately think the worse.  Marvellous Marvin is more or less back to his oldself although does get a bit tired which after the surgery he had isn't surprising.
21 August 2011 - The Guernsey Kennel Club Match - Judge Kirsty Armitage - "Oliver" Lyntonridge Loyalty Card at Derrindee won his class. "Marvin" Shenmore Spruce at Derrindee also won his class. Both Boys competed for Best in Match and too my delight "Oliver" was awarded Best in Match! This is the second time this year he has won this title. A BIG Thank you to the Judge and all my fellow exhibitors for there kind words!! 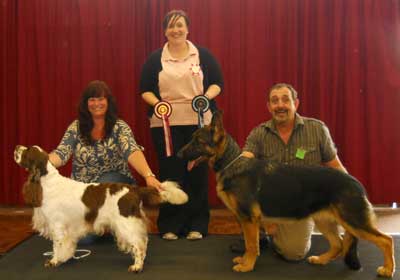 06 August 2011 - The Kennel Club of Jersey Summer Championship Show - Judge Mrs Di Morgan - "Marvin" Shenmore Spruce at Derrindee - 1st Cocker Spaniel Open Dog. "Oliver" Lyntonridge Loyalty at Derrindee - 1st English Springer Spaniel Open Dog. Both Marvin & Oliver showed really well today so I was very pleased with them even though we didn't take home any BOB's today. We had a lovely day with good friends ... we laughed and laughed and enjoyed each others company .. very tiring day though with the boat coming home delayed by and hour and a half so we didn't get home until midnight!

18 June 2011 - The Kennel Club of Jersey Spring Championship Show - Judge Mr Chris Bexon - "Marvin" Shenmore Spruce at Derrindee - 1st Cocker Spaniel Open Dog. "Oliver" Lyntonridge Loyalty at Derrindee - 1st English Springer Spaniel Open Dog, Best of Breed, Gundog Group 3. What a day delayed going to Jersey by an hour ... get to the show ground to find that we were in the marquee/tent which was getting bashed by the wind. It was also very crowded in side which upset quite a few dogs. Marvin wasn't on form today, but Oliver kept the "Derrindee" flag flying. Lovely company with great friends though .. even with a rather bumpy crossing back we did have a good laugh.

10 April 2011 - The Guernsey Kennel Club Match - Judge Mrs Christine Marret from Jersey - "Oliver" Lyntonridge Loyalty Card at Derrindee won his classes and then challenged for Best in Match which to my delight he won !!! We have been close on numerous occassions to taking the BIM title but have had many reserves. Fingers crossed this is a sign of things to come :-) Thank you to the Judge and all my fellow exhibitors for there kind words ..... 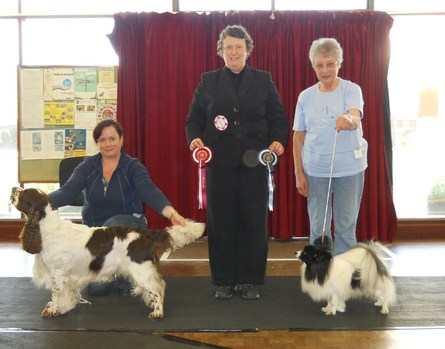 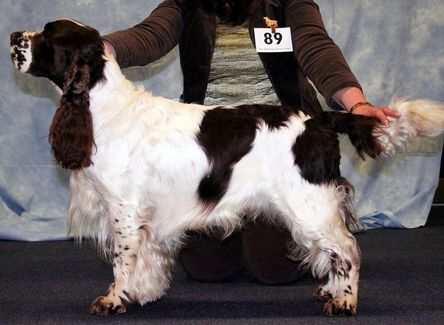 13 February 2011 - The Guernsey Kennel Club Match - Judge Mrs Jennifer Collas - "Oliver" Lyntonridge Loyalty Card at Derrindee won his Adult Class and then was placed Reserve Best in Match. We had lots of lovely comments from fellow exhibitors saying how lovely Oliver moved and that he really showed well. Photo below Rachel Martel and Araki Rumour Hasit the Judge Mrs Jennifer Collas and Oliver and I. 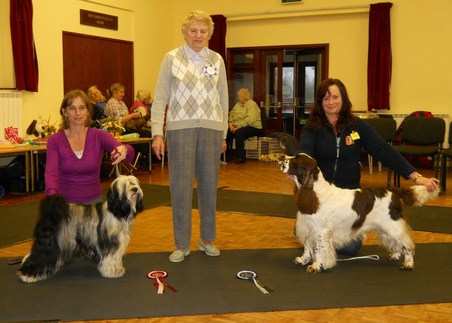