10 December 2017 - The Ladies Kennel Association Championship Show - Judge Mrs Alex Brown "Metkar".  Due to the weather conditions, lots of snow and the amber weather warnings that were given on the news we iffed and amed about going to the Show and when we got their Freddie's class was in being judged, so he missed his class but Alice had a lovely 2nd in Graduate Bitch and we had lots of lovely comments on how she is looking.  Both Freddie and Alice had an aftershow run around in the snow before heading back down South.  Lovely to catch up with friends that had braved the weather.

03 September 2017 - The Guernsey Kennel Club Autumn Open Show - Judge Mr David Shields "Wilholme".  Alice 1st Cocker Spaniel Limit Bitch and Best Bitch.  Freddie 2nd Cocker Spaniel Open Dog and 2nd AV Gundog Open Dog.  I was so pleased with how Freddie showed today after his not wanting to show routine back in August, he could of pushed a little harder but he enjoyed his day and that is the main thing.

23 July 2017 - Guernsey Kennel Club Match - Judge Mrs Christianne Beardow.  I was really delighted to be showing a gorgeous little Cocker Spaniel puppy bred by my friend Lynne Symphorien and owned by Anne and Martyn Le Page.  Little Luna won her puppy class and to my total amazement and delight she only went and won Reserve Best Puppy in Match.  Freddie won his class and enjoyed his afternoon.

12 June 2017 back from a fab road trip taking in a few shows and visiting the Tickle's in Haydock :-)

11 June 2017 - Three Counties Championship Dog Show - Judge Mrs Linda Crowley "Ashalon" - Freddie was placed 5th (VHC) in his Limit Dog Class, although was a total nightmare today!!  Alice on the other hand showed beautifully and to my sheer delight was awarded a 2nd in her Yearling Bitch Class and has now qualified for Crufts 2018!!  Thank you so much to our wonderful judge for her patience with Freddie and thinking so highly of Alice!!

04 June 2017 - Southern Counties Canine Association Championship Dog Show - Judge Mr D Moss.  Freddie showed beautifully but was unplaced in a strong Limit Class.  Alice however strutted her stuff to a 4th (Reserve) in her Yearling Bitch Class, just missing out on qualifying for Crufts.  I must thank my friends at the show as I was really missing my Dad and was a bit emotional.  Thank you for your hugs and words of encouragement.

21 May 2017 - The Guernsey Kennel Club Spring Open Show - Judge Ms B Johnson - Freddie "Bitcon Spy for Derrindee" 1st Cocker Spaniel Open Dog and 3rd Gundog Open Dog.  Not Alice's day today but she showed beautifully.  I had the pleasure of showing my good friend Ginny Heaume's Clumber Spaniel Florence - "Suelynda Diamonds R’ Forever at Francfief" who won 1st AVNSC Gundog Puppy, Gundog Puppy Group 1, 1st AV Gundog Puppy, 1st Gundog Novice and 1st BC Watson.  We then went on to win Reserve Best Novice in Show and BC Watson Finalist and then under Ms M Sargent we went Reserve Best Puppy in Show.  This wasn't an easy show for me as was really missing my Dad today and wished he had been there to see how well we did.  I'm sure she was watching though.  Thank you Ginny for allowing me to show Flo for you, we both really enjoyed it.

Critique from Ms B Johnson - Open Dog (2) 1st De Carteret’s Bitcon Spy For Derrindee.  Very well made dog with good head and expression.  Strong neck and good layback of shoulder.  Well ribbed back leading to short loin and strong hindquarters.  Moved well.  Pushed hard for BOB but in the final analysis just felt that the younger dog had the edge on movement.

Critique from Martin Sanders - Runner Up De Carteret, Bitcon Spy for Dearindee, Cocker Spaniel, B/R.  Quality boy as his breeding would suggest.  Masculine well-proportioned head with a kind eye and gentle expression.  Well placed ears with a good front assembly.  Plenty in fore chest, big ribs with compact body.  Strong bone with compact feet.  Moved out well on the out and back especially from the rear.  Presented in excellent order.  No disgrace here being runner up!

11 March 2017 - Crufts the worlds biggest dog show and it was certainly busy on the Saturday.  Cockers had a high entry which is usual for the breed.  Alice was in Junior Bitch with 19 entries.  She showed very well but was not placed but really enjoyed herself.  Freddie was in Mid Limit Dog with 18 entries.  After the Guernsey Show I was hoping that he would show himself properly and he didn't disappoint, he motored around the ring with a happy wagging tail, I was really pleased with how he did.  He didn't place but we had lots of lovely comments on how well he is looking.  It was a really lovely day catching up with lots of friends, watching my lovely friend Ginny and her Clumber Spaniel Flo getting a 2nd place in her Puppy class and qualifying for Crufts 2018!!  This was Ginny's first ever trip to Crufts, they both really enjoyed the day.  No photo's of Alice unfortunately but another good friend Liz Elmont took these of Freddie :-)  Thank you Liz xxx 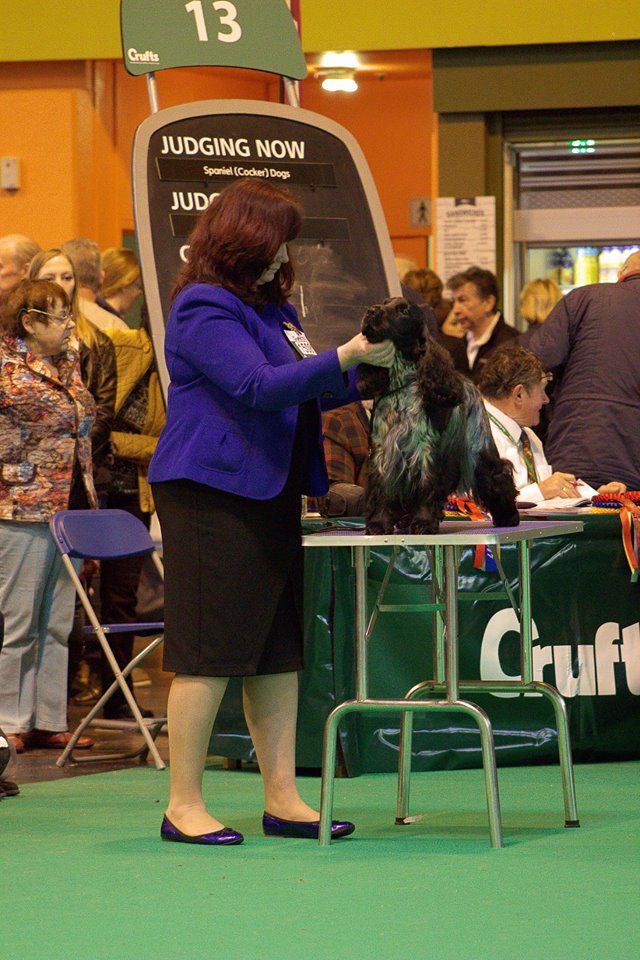 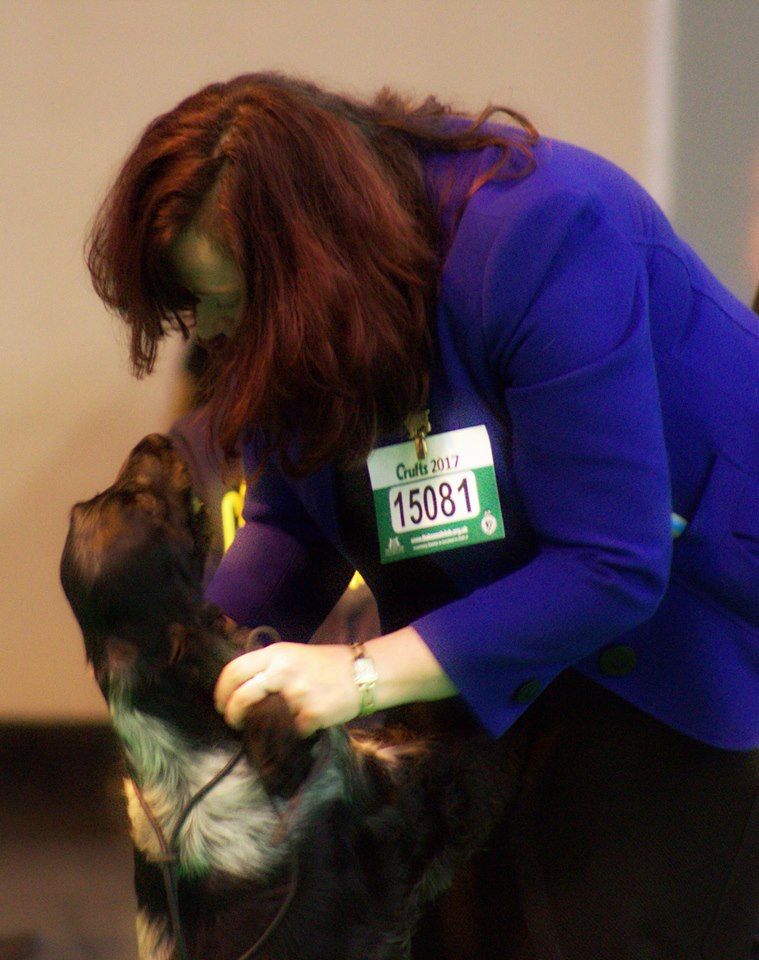 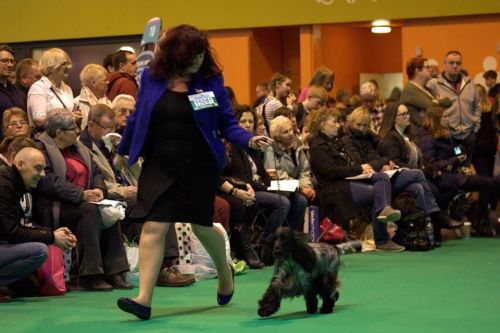 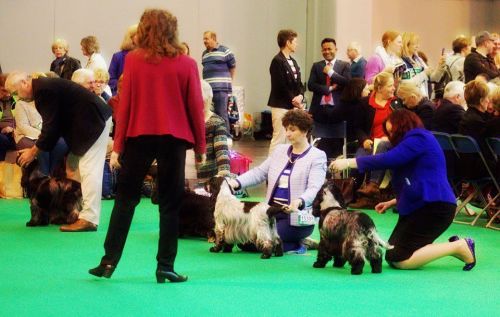 26 February 2017 - Guernsey Kennel Club Members Show - Judge Mr J Walton-Haddon (Ilsham) - Alice "Kyna Slakc Alice with Derrindee" - 1st Limit Bitch, Best of Breed (her first one), Gundog Group 3, Best AV Junior Gundog, Best Exhibit under 18 months and 3rd Best Junior in Show!!  Freddie was not in the showing mood today and had his nose to the ground.  He looked absolutely stunning today.  Some standing practice is required before Crufts!!  Lovely day with friends and so delighted to see my wonderful friend Ginny Heaume take Best Puppy in Show with her Clumber Spaniel "Florence"!! 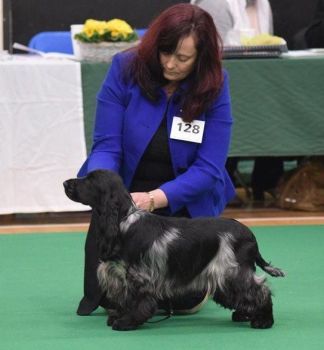 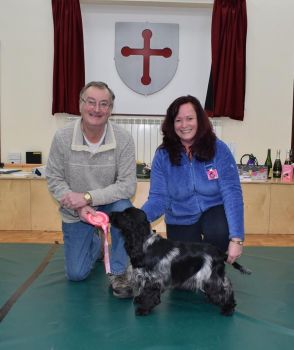 5 January 2017 - Well with all the festivies now done and dusted it is down to sorting out entries for Channel Islands Puppy of the Year for Alice, the Guernsey Kennel Club Members Show, Crufts and looking at some shows in UK.  A busy and expensive time :-)

Wishing all our family and friends a very Happy New Year, filled with health and lots of success in the showring.
I hope it's a good one for you all.  We are looking forward to the new showing season
and what 2017 will bring :-) 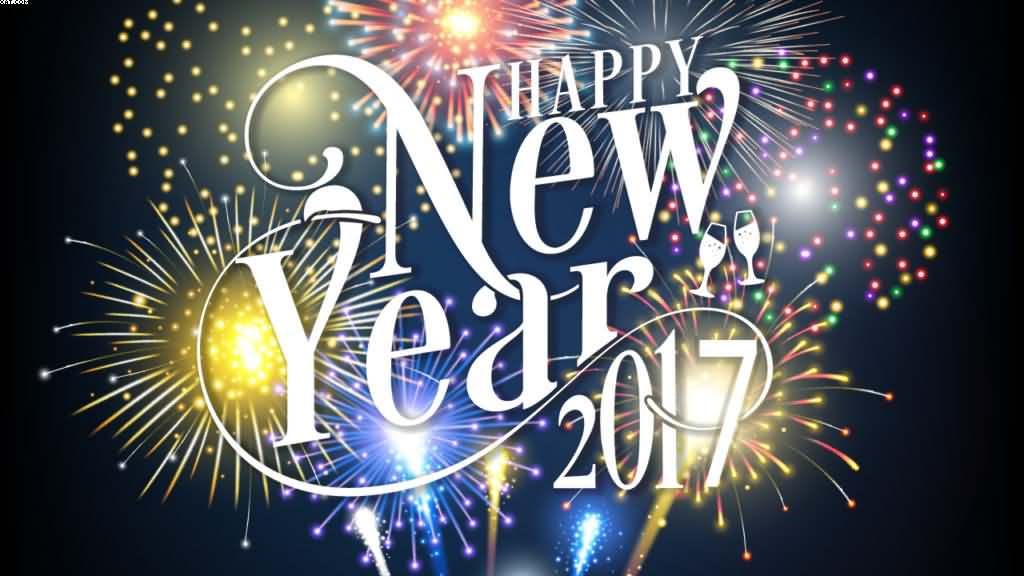